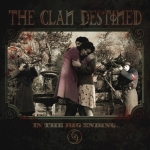 THE CLAN DESTINED
In The Big Ending...
(Hammerheart Records)
27:26min

The story behind the formation and the first period of existence of THE CLAN DESTINED is so weird and full of contradictions, I spare the details here. To make it short: this is the band Martin Walkyier of SABBAT and SKYCLAD fame started as his new project in 2004. Only a demo saw the light of day a year later, somehow prophetically called “In The Big Ending…”. No one knows if there will be another release, even though the band is active again. So these recordings became a little bit legendary and thus got recently re-released via Hammerheart. Musically, the six songs here are somewhere in between the bands Martin Walkyier left his imprint on. But it was more up to date back then. Just listen to the opener ‘Swinging Like Judas’: we find the contemporary groove and a modern riff already in the introduction, some keyboards and choirs even in the near of orchestral Black Metal accompany the song. Thankfully Mr. Walkyier’s voice and a classic solo guitar saved the day here. With the following ‘I Am Because We Are’, the modern influences get reduced significantly, making this vigorous song with female co-vocals enjoyable for those more into SKYCLAD. Next up is a song called ‘T.C. Lethbridge’, a cover of a song of the pretty obscure project THE SONS OF T.C. LETHBRIDGE. I can’t compare this version to the original, yet in this folkish interpretation, it fits well here. But the real highlight of “In The Big Ending…” is still to come: ‘A Beautiful Start To The End Of The World’ (great title!), a very catchy song with beautiful melodies and a certain alternative appeal. This song had (or better: still has) the potential to become an independent single hit. To end the glory, more or less, ‘Devil For A Day’ has some too modern breaks in contrast to more catchy and some even progressive moments, making this one a little disjointed. The same can be said for the final ‘More Than War’, yet this one is more pensive. So in conclusion, we have a record with one killer tune and a little more sunshine than rain. Yet this one appeals more to the open-minded readers of these pages for sure. They are welcome to visit: www.theclandestined.com or www.hammerheart.com