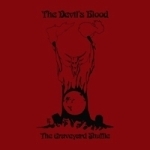 It is seldom nowadays that a band gets already a lot of attention without having released anything properly at all. It may of course be that some of the members’ original bands (URFAUST among others) made the name easier spread, but basically just some random MySpace-songs gave them attention, and this Occult outfit was instantly booked for the Dutch Roadburn-Festival, and several labels were interested in signing them. This 7″ now is the first collaboration with their new label and their first physical output at all. THE DEVIL’S BLOOD could best be described as a mixture between COVEN, early IRON MAIDEN or for the vocals, MERCYFUL FATE, although this description probably is still a bit vague. The A-side features the title track which is quite different compared to the version on the MySpace-demo, a bit of the impetuous charm was lost in the studio it seems, yet it all sounds a bit clearer and you can actually recognize that vocalist The Mouth Of Satan is a woman! The B-side track, a new one by the way, is a bit more relaxed than its straighter opposite, less speed, trickier. I am pretty sure that this 7″ is only a hint of what will come in the future, a full-length-album is already in preparation and due in autumn. www.van-records.de, www.myspace.com/thedevilsblood