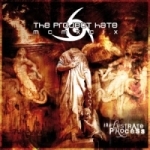 If ARCH ENEMY, DIMMU BORGIR and LACUNA COIL had a musical love child, THE PROJECT HATE MCMXCIX would be the result. ‘The Lustrate Process’ is the 8th album from the Swedish Metallers. However, before I begin the review properly, I must warn people that this is a LONG album. Each of the 7 songs clock in at over 7 minutes, so those of you that like your Metal brisk and to the point, I advise you to turn away now. However, for the more patient among you, there is alot of great material on this release that makes it well worth a listen. The instrumental chops on display here are of the highest quality, with guitarists Anders Bertilsson and Lord K. Philipson delivering blistering yet tasteful solos throughout, the solos ‘The Locust Principles’ (which could easily have been written by Micheal Amott) on ‘Descend Into The Pits Of Eternity’ being a prime example. They aren’t slouches in the riffing department either, with my favourite track off the album ‘Our Wrath Will Rain Down From The…’ being a showcase of modern Swedish Metal riffing and soloing. However some of the riffs have a ‘heard it before’ kinda feel. Singer Jörgen Sandström, of GRAVE fame, roars and growls drive each song forward and as always are one of the highlights of the album. However, while their other singer, Jonna Enckell, who provides the clean, operatic vocals, is clearly a gifted singer, her voice is too similar to that of other female Metal singers, such as Chrisitina Scabbia from LACUNA COIL to stand out or leave an impact on the listener. Drummer Thomas Ohlsson does a fine job of keeping everything on track, however many of his beats are too similar sounding or not very exciting, however we do get a glimpse of what he is capable of on ‘Descend Into The Pits Of Eternity’ where a nice little blast beats finds its way onto the record. Lord K. Philipson’s keyboards are very reminiscent of DIMMU BORGIR but are quite effective in adding a sense of grandeur and epicene’s to the songs, which I feel he was aiming for. Michael Håkansson does a fine, unflashy job handling bass duties also.THE PROJECT HATE are a band who aren’t short on ideas, as we each song is layered with guitars, keyboards, piano’s, operatic singing (hence the DIMMU BORGIR comparisons) however, these ideas are a bit hit and miss; ‘See The Filth Become The Flames’ being an example of a hit and ‘ Burial Of The Gods’ a miss. A few problems I had with the album were that many of the songs follow too similar a pattern. Every song goes from clean vocals to growls and then back again, pausing for a keyboard / piano break, then a solo and back to growling again. This approach is followed on nearly every track, making the album a little too predictable. The long song times also don’t keep the listeners attention for very long, and I found myself losing interest during the longer piano / keyboard breaks, ‘Burial Of The Gods’ being a prime example of this. However, if you’re willing to tough it out, there is a lot of quality material to be found here. If you like your metal extravagant and grand, then ‘The Lustrate Process’ will be right up your alley. For more info on THE PROJECT HATE MCMXCIX check out: www.theprojecthate.net or www.vicrecords.com