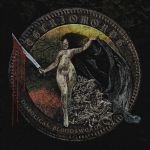 When ”Diabolical Bloodswords” landed on my desk, I had never heard about THERIOMORPH. Though with a little research it showed that I already knew a tad about the band, as it is a one man band featuring P.E. Packain, who has roamed in abominations as SARGEIST, HORNA, SATURNIAN MIST and the mighty NEUTRON HAMMER – a couple of other bands that I have to check out. All bands tied to strong satanism, occultism and esoteric mysticism. In the other bands Packain has been in, he has handled anything from guitar, bass, vocals, drumming and percussion, so all bases should be covered. How much he has been involved in the songwriting in his earlier (and existing, besides the one man projects, I reckon he has been writing all songs there) bands I have to leave unsaid for now. Though after a sound dose of listenings to “Diabolical Bloodswords”, I have to admit he has quite some talent for penning a hooking song, drenched with the right amount of chaos and progression to make it interesting. When I had the first listen to the album, I hadn’t checked up on THERIOMORPH’s whereabouts, and blindly guessed the band was from Norway due to the overall sound, atmosphere and the DØDHEIMHSGARD like atmosphere and mysticism, when the music went from Black Metal to more progressive and experimental plans, the guitar sound and some of the vocal variations. Though I wasn’t spot on, as the band hails from Finland, though I still hold on some of the inspirations in the songwriting and presentation goes back to the mighty Norwegians and their take on the world of songwriting. This album is so much more on top of that though. Finland and Black Metal has a great tradition as well, and there are quite some sinister and dark bands up there, taking things to extremes. Now that Packain has been a part of such bands, it makes great sense that he continues that path, taking it a step further. SATURNIAN MIST might be ritualistic and chaotic, channeling something from beyond and within to a certain extent, especially in the good old days. THERIOMORPH is also quite ritualistic all the way through, with great passages of almost droning hypnotic riffs, pulsating rhythms and a calling from a world beyond ours. There is not a bad track on this album, though everything falls in place in ‘Nocturne – Under The Uninvited’ – those layered echoed vocals, chaotic progression, eerie psychotic atmosphere, dreamlike waves of percussion and riffing, synth from the grave and I could continue. This album took a little while to get under my skin, as it is quite layered, though when given time, it’ll give a great deal back to you, if you dare to let it in, that is. When music takes you away to another plane, you know it has been well written and channeled through the instruments just right. “Diabolical Bloodswords” gives me that feeling. When I close my eyes, the music takes me away to a place, that doesn’t seem like a universe pleasant to inhabit, though when you’re there, you won’t get away easily. Enter if you dare: https://theriomorph.bandcamp.com, label contact: www.facebook.com/terraturpossessions