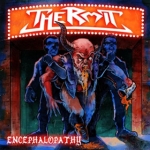 Here we have a modern day Thrash band from Poland. So, that means anything from RAZOR to EXODUS has a place in their style. While I’m not exactly blown away, this isn’t a terrible record. ‘Zombie Lover’ starts off aggressive then tapers off to lots of melodic riffs and shiny bright solos. Unfortunately there’s one part that sounds vaguely Deathcore-ish and I’m definitely not on board with that. It’s one of those songs that could easily be two or three songs, no real need to squash them together but plenty of bands do that. As is usually the case with retro Thrash, there seems to be a lot of stuff in the music that’s designed to prove the band’s thrashiness. It’s difficult to describe but when a song like ‘Now You See’ takes a long minute to warm up from a tediously generic solo. It’s a little artificial. And it happens again right after. ‘Second’, I suppose is exactly what it claims to be – another attempt to persuade the listener that, yes, we have all the parts necessary to form a Metal band. Now I won’t say they can’t play. The guitar work in particular is very good and capable. The vocals kind of bug me, sounds like the dude is struggling to hit a higher register than he’s normally able to. So the pattern for this release seems to be slow, generic, intro, and technically good Thrash. Once again, for the third song in a row, you’re treated to the same build up. It’s like the band has a tunnel vision focus for this one way of arranging a record. But then there’s a spoken word prayer in Arabic (I think) for 30 seconds and the next largely skip-worthy song is underway. Finally there’s ‘Thermitallica’, this band’s all-in-one tribute to, you guessed it, METALLICA. The Band That Should Not Be gets a tribute songs mostly from the "Master Of Puppets" era to the "And Justice For All" era, plus a "Death Magnetic" song and one song from "Metallica." The singer actually does a good James Hetfield on ‘The Shortest Straw’. Interesting idea to throw a bunch of cover songs into one tapestry of a tribute but it’s ridiculous. I like hearing cover tunes but this is excessive. Give it a go if you like but I’ll stick with other stuff. Cheers. www.thermitmetal.com, www.facebook.com/thermit