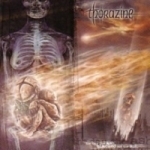 THORAZINE
The Day The Ash Blackened Out The Sun
(Deathgasm Records)
34:47min

To be honest I’m a little disappointed by the Canadian technical Death / Grind act’s third full-length since the weakness of its predecessor – the production – still has not been overcome and the complex material of THORAZINE can not fully develop the wicked and twisted force slumbering in most of the songs and especially the guitars sound a bit too muddy. Apart from that the band carries musical ideas en masse, varies between grinding chaos, jazz rhythms, progressive acoustic guitar passages and elaborated late DEATH-like leads united by a schizophrenic vocal performance ranging from high-pitched screams to brutal growls. The result is a highly aggressive piece of music exceeding its predecessors in freakiness and impact causing a slight decrease of structure. Unfortunately shortly after the album was recorded singer Shane left the band to pursue his career in making video games, but his sick and energetic performance on "The Day The Ash…" is certainly a nice farewell-gift, but raises questions how THORAZINE will develop in the future. This is certainly a well-crafted album, skilfully played and of relentless brutality, but the muddy sound and increased chaos of complexity makes it partially hard to grasp and appears at times a little overdone. Still, fans of Canadian Death / Grind-weirdos should give THORAZINE’s third attack a serious chance and songs like ‘U.N. Holy War’, ‘Behind Cold Eyes’ or the fantastic, utterly morbid ‘Sewn By Numbers’ should have been heard to be believed… Sounds at www.thorazine.blacksky.ca; further infos on the album’s availability at www.deathgasm.com