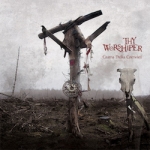 But now for something completely different…THY WORSHIPER is band that doesn’t fit into the standards known on this site. The career of this Polish band lasts for more than twenty years now, with a nearly ten year break after their first album and another break caused by the relocation of main man Marcin Gąsiorowski to Dublin. The line-up changes in THY WORSHIPER that were caused by these circumstances also included adding or removing some unusual instruments like flute or organ. Musically, the band defines themselves as a mix of Folk and Black Metal. Now I first got in touch with them through their third album "Czarna Dzika Czerwien" (Polish for: "Wild Black Red"). This album touches Black and Death Metal only marginal. The opening ‘Piach’ starts with tribal drum rhythms in the intro, accompanied by a female voice that reminds of Gothic Folk music. The some industrial drumming sets in, paving the way for some Black Metal outbreaks that seem to be more a means to bring change than a real basis of the sound. ‘Czarny’ is up next and it is merely Metal anymore, instead it is a Eastern European Folk song spiced with both Metal elements and U2 styled guitars. The following ‘Deszcz’ surprises with an intro piece that immediately made me think of some old DEAD CAN DANCE recordings or the Norwegian Neofolk project HAGALAZ RUNEDANCE, but in this one, the only thing that reminds of Metal is the coughing voice of guitar player Marcin, who shares the vocal beauties with singer Anna. The focus on Neofolk is kept up in the long of the album, garnished with unusual instrumentation like a jaw harp (‘Żniwa’) or strange voices (‘Na Pohybel’). On the one hand, this album features a color palette of ideas, woven into a very special sound that unfolds its brilliance not on the first hearing. On the other hand, THY WORSHIPER not really takes the fancy of Metal maniacs, especially those who are into the extreme side of Metal. But if you think yourself to be open-minded or have a faible for above mentioned music, it is not a fault to check out the band: www.thyworshiper.com, www.facebook.com/thyworshiper or the label: www.paganrecords.com.pl