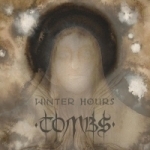 Other publications such as Decibel have a way of both infuriating sane readers and casting albums like this into perspective. Decibel is vexing because it promotes idol worship, not real criticism. However, it also sobers the way we can look at this debut album by TOMBS. By now, people who read Decibel likely as not eschew fanzines and websites such as VOICES for a quick fix in the glossy pages on their magazine stand – sad, but it should remind us that a band’s target audience is as much a part of their album as anything else. Unfortunately, bands do indeed care about who listens to their music and to that end, they’ll write cheesy, melodious songs in mimicry of UNANIMATED or AT THE GATES. They will also, provided they’re writing in 2009, claim the "old school" label and borrow riffs and sounds from whomever predates them. This is a recipe for disaster if you aim to please people in the underground, but if a band’s goal is for notoriety in Decibel, then this album is nothing if not a masterpiece. Though the music is ordinary, it wouldn’t be popular if thousands of fans didn’t enjoy it. If you happen to be one of those people, then buy this record straightaway. www.myspace.com/tombsbklyn, www.relapse.com