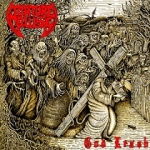 I was first introduced to TORTURE PULSE through the debut full length "Plague Poetry". I remember it was a bit of a pain (at least for me) to find this record in LP format, but I wanted to appreciate the whole cover of the album that way. I heard some great things about this band, first spin I was sold, I really enjoyed the band, but that was back in 2010. 5 years have gone, and since 2014 I was wondering what was going on with TORTURE PULSE, they put out an EP last year but it was pretty much unknown to fans of the genre, so I thought that maybe they were planning a new album or just split up. Early this year, Xtreem Music announced the partnership with this Finnish folks, and a new album was in progress. I knew that was a great move right there, a label that is putting out great releases one after another now putting out a record of a great band that deserved more attention. "God Leash" is the band’s second full length album, and let me tell you, they didn’t miss. This is a solid slab of Finnish Death Metal with tons of groove, mid / slow sections and a great sounding production (not too polished, not too bright). Now let’s talk about this great album that could be a contender for Top 10 Death Metal album of the year. "God Leash" is a step forward in the band’s evolution, it feels more focused and straight to the point, sometime I felt "Plague Poetry" had some guitar sections that could have been shorten to make the songs sound more tight, this time they nailed it. The guitars lead the biggest part of the record, however the drums and bass make everything fall together with massive low vibe sometimes reminiscent to what CORPSESSED does. The blasting and slow sections goes hand in hand better than before, and the vocals are less raspy and more harsh. Also there are some dubs in the vocals that make the chorus sound killer (not sing along chorus but… you know what I mean). So all in all TORTURE PULSE managed to go a step further so I hope this band now get’s the recognition that they deserve. You can pay a visit to their site and see / listen for yourself. Finnish Death Metal is alive and well, or can I say "dead and ugly"? Buy and listen to the record at www.facebook.com/pages/torture-pulse/78298136587, www.xtreemmusic.com