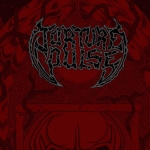 We all love the stench of supuration, a strong smell of rotting flesh coming out of a decaying corpse, don’t we? I mean, especially when all this can be related to some old school Death Metal – and extra specially to some 90s Swedish sounding Death Metal – and yet preferably the demo times I can clearly hear some of you most hardcor-ish of this particular genre yelling from the top of your rotten lungs out there. Well, your screams (or whatever) have been answered, sort of: just try Finland’s TORTURE PULSE and you are about to get a guaranteed load of some juicily rotting old school Swedish death and decay sound wise, in the true 90s Swedish fashion and spirit to be more precise with all of you. "Devilroot" is no new release from these Finnish torch bearers of old school, very strongly Swedish tinged Death Metal. In fact, all the 7 songs on this opus are said to be ‘leftovers’ out of the recording sessions of TORTURE PULSE’s debut album "Plague Poetry", released in 2010 already. The songs kind of didn’t fit in for "Plague Poetry", so the release of them happens now, 4 years later. As it already was the case with "Plague Poetry", "Devilroot" sounds like any old demo that such Swedish names as CARNAGE, NIHILIST, DISMEMBER – or even GOREMENT, put out in the late 80s / in the beginning of 90s. This delicious, superbly down-tuned guitar sound on "Devilroot" especially, comes shamelessly close to the one CARNAGE had on their many ways classic "Dark Recollections" album. This specific tone of the guitar sound is exactly – or at least nearly the same on TORTURE PULSE’s mini CD: extremely crispy, immensely heavy and simply reeking of all kinds of nostalgic vibes from the golden, past times of Swedish Death Metal. In other words, as some sort of a nostalgic trip, "Devilroot" works just fine. But unfortunately it will never gain the same cult status as so many Death Metal releases did from the era some 20-25 years ago. Eh, can you somehow handle that perhaps? If so, then by all means let "Devilroot" entertain you just a little bit… The rotting reek of TORTURE PULSE comes from here: www.facebook.com/torturepulse, www.violentjourneyrecords.com