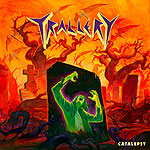 I hate their logo. I don’t like their cover art. I just have to say the hair cut of the bass player / vocalist looks like one of the Harlem Globetrotters and reminds more of a Rap band member. And then the tag Thrash Metal attached to a band in 2013, which by the way is their debut recording, and I was ready to fully rape this album. Then the damage starts. Oh, boy. As if I was caught in a time vortex to 1986. Spanish trio TRALLERY is a return to form to what real Speed Metal is… SPEED METAL… when that word was applied to monsters like METALLICA, MEGADETH, SLAYER, TESTAMENT, OVERKILL… The guitar tone on this album is bordering perfection, the execution of the bass guitar suddenly took away the hair image of the vocalist, add to that a very solid drum attack. And we are talking of a modern day jewel of old school inspired Speed / Thrash Metal, by a band which is also influenced by the heaviest Hardrock bands around. Riffs after riffs, we are exposed to one of the best bands of the style no matter the year. Although the vocal display is not up to the level of James Hetfield or Chuck Billy, he is good, and sounds just as good, taking a very melodic approach or doing a more growling-style (which is done in very small doses). There are some killer even radio-friendly songs like ‘In The Wings Of The Night’ and the closer ‘Path Of Life’, which no matter if any other one will say they are commercial, the songs are fantastic. Yes, this is the band that transported me to the day I bought “Master Of Puppets” more than any other has done. Me, the one more into the blackened Death Metal complexity of bands worshipping agony and ancient demons, but one who will never forget where it all started. Now, they just need to work hard on their art and logo…all the rest, damn, it is done. www.tralleryofficial.wix.com/trallery, www.facebook.com/pages/trallery-thrash-metal/191694654270978, www.xtreemmusic.com