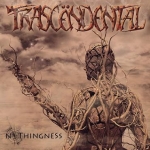 Coming from Spain, this band was formed back in 1991, and to be honest although I was following the scene in that country in those years, and have many releases due to tape trading and buying, this band was lost in the countless other bands from that country…until Xtreem Music and Dave Rotten decided to call them from the grave for this compilation made out of their two last releases. And with the sound of their last album “Dimensions” included in here, we are now facing a killer technical Death Metal band, in the vein of DEATH, CYNIC and CORONER with some MALEVOLENT CREATION touches here and there and a vibe in riffs that can only be related to BOLT THROWER. They do not play technical for the sake of it, no, it just comes out very natural, and have a very good production. Strangely enough a song like ‘Gods (False Answer)’ has some riffs that reminded me of what IMMORTAL did years later with "At The Heart Of Winter". Really a shame that the band ceased to be with this release as it is some of the best in the style. Their first album comes second in this compilation, and it is in in a similar style, although more direct and rougher sounding. These songs are also a bit more thrashier, thus making the final sound to remind me of the debut album of THE MIST from Brazil. This is the kind of band that deserves to be unburied not because they are over 15 years old (and many people think that it is the only requisite to be cult or something), but because they were ignored at the time, and actually were doing something that can be heard many years later and which will makes you bang your head like in those days. Recommended! www.xtreemmusic.com