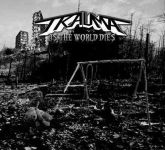 Good old Heavy Metal with Speed Metal in the mix, is something I never can get enough of. These Americans were formed in 1981 and is perhaps most known for having had a bassist in the fold, named Cliff Burton, who later joined METALLICA and became legend! TRAUMA is much more than the band Burton played bass on a demo. They have carved their stone in the history of Heavy Metal with their debut album "Scratch And Scream" from 1984, released on Shrapnel Records, that together with a track on "Metal Massacre II" from Metal Blade Records, were all we heard from the band back then. TRAUMA got back toghether in 2013, together with a reissue of "Scratch And Scream", that brought along the new album "Rapture And Wrath" in 2015, which was a decent album without kicking too much ass. Now we are writing 2019 and the band is back with "As The World Dies" and a couple of new members, if we can call Joe Fraulob and Greg Christian ‘new’, they are as seasoned as the rest of the band, to be honest. Though energy-wise something has happened, the band seems revitalized and Donny Hillier sounds more fierce than ever. It is a classic American Heavy / Speed Metal album, catchy heavy chopping riffing, great melodic and hooking leads, pounding rhythm patterns and a hell of a vocal performance, together with great chorus work and sing-along parts. "As The World Dies" will soon start a party, if we look aside the lyrical aspects of the album, of course. If you miss the 80s sound freshened and powered up, then "As The World Dies" is the answer to all your prayers. This album hit me in a dry spot and made the end of my March rock! Powerful and classic, delivered really well, in a quite well-sounding and -fitting production with a lot of power all the right places, and did I mention the vocals from Donny Hillier, daaaamn! Join the unstoppable force: www.facebook.com/traumathrash, www.puresteel-records.com