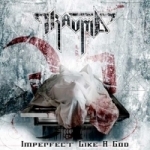 Of the Polish technical Death Metal band TRAUMA I knew only their “Daimonion” album (1998) until I received this one. I listened to their sophomore full length, “Suffocated In Slumber” (2001), but I didn’t buy it because I found it inferior to their first (which featured also some very interesting demo material). And I have the same problem with “Imperfect Like A God”. In theory, this one is a perfect record, but only in theory. The production is phenomenal, the musicianship stellar, and the layout attractive. But I wonder: where is the excitement? Nowhere, I am afraid. TRAUMA didn’t realize that looking for musical complexity for the sake of it could easily lead to a dead end and couldn’t make it for real and memorable songs. TRAUMA play modern Death Metal, and that is the sore point here. Add staccato riffs to samples and jazzy touches (especially in the drumming parts, which are awesome) and you can figure out what this record is about. The result comes out pretty annoying, I have the feeling I listened to this 1000 times already. The synthetic Death Metal of today (and the same goes for the “new” techno-Black Metal) will certainly not pass the test of time; I am sure, it will grow old and dated very fast. Gone are the days when almost everything from Poland (TRAUMA included) was interesting and rejuvenating. When I compare this album to the Polish classics of the mid 90s, I can’t help but to feel sad. The reality is that extreme Metal is heavily professionalized in Poland, because it is very popular over there; the musicians consider their art too much like a job you have to do perfectly. But I am afraid they follow the wrong way doing so. “Imperfect Like A God” doesn’t deserve its title because it is actually too perfect, too clinical, almost sterile. This album is a product more than a slab of enjoyable music. While VADER have kept more or less the same formula since their debut, TRAUMA (who could claim the same longevity, because they formed at the end of the 80s) do the reverse, their need to “progress” supplanted the actual fun in playing music, at least this is the feeling coming out of this disc. I prefer old sounding stuff, but it is of course a totally subjective point of view (like in all reviews). To sum it up: excellent technique for a boring result. My advice: listen to this before actually buying it.