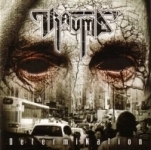 Bottom line… Poland is a Death Metal machine. This country churns out quality Death Metal bands like no other country on the planet. You can make arguments for Brazil, Sweden, Canada, the Netherlands, Germany and the US but to me no other country takes their craft as seriously as Poland does. The thing is most people aren’t even aware of the vast majority of the bands that are coming from there. Of course most people are going to know about Vader, Behemoth, Decapitated, and to a slightly lesser extent Sceptic, Lost Soul, Dies Irae etc… but there are a ton of bands there that go by mostly unnoticed to Metalheads. Now it’s not totally our fault, some of the best shit from Poland is extremely hard to come across outside of Poland itself (it took me over a year to find Pyorrhoeas CDs and as far as I know you still can’t get the new Sceptic outside Poland). Out of all these killer bands there is one that stands out above the rest. That band is Trauma. These guys have been around just about as long as Vader has and they are no less talented. It is a mystery to me why they haven’t gotten the recognition they deserve. Well hopefully that will change because Unique Leader decided to distribute their newest album "Determination". These guys are the complete package. Every member of the band holds his weight. The vocals go low and high, the guitars are solid whether it be the leads or the riffs, the bass is…. well I’m sure the bass is good although this CD suffers from same fate that 99% (except PAVOR!!) of all extreme metal CDs suffer… but what I hear I like. The drummer is fucken incredible. I guess the best way I could put it is that in a field crowded with talent, this guy manages to distinguish himself. The production is unbelievable (just a little more bass guitar please). This is one of the reasons why Poland dominates Death Metal. The production is always perfect. Since were on the subject of production I should bring up what would be considered the only fault in this CD. And that is the production. Now why would I say that after I just got done saying it’s perfect? Well the thing is Trauma has been around a long time. When they first began they were more in the Morbid Angel camp of Death Metal and had a dirtier production with more of an "old school" atmosphere. On the album before this one ("Imperfect Like A God"… also fucking excellent) they really changed their style to more of a modern sound with massive professional sounding production and a heavier emphesis on musicianship than on atmosphere. Some fans resented this and miss the old style. As far as I’m concerned I like all their albums and I can appreciate both styles. If you got into Metal in the last few years and like the current wave of bands who try to impress with their musicianship then check this out. You will not be disappointed. To all the old schoolers, sorry, but they are continuing on the path they began on "Imperfect Like a God"… but hey, when they do it so well you got to give them some respect. You can get info about the band and buy the CD here: www.uniqueleader.com.