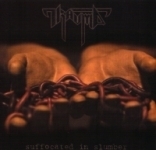 Nope, this ain’t a new album of the legendary band that released the “Scratch And Scream” full length and that METALLICA’s Cliff Burton (R.I.P.) used to be part of in the early eighties. This is a Polish fourpiece that has been around for an almost equally long time. They originally started out as THANATOS (for obvious reasons not a clever name choice either), put out two demos under that name and in 1992 finally changed their name into TRAUMA. “Suffocated In Slumber” is already their third album (following the cassette only debut “Comedy Is Over” and their Pagan Records debut “Daimonion”), but probably the first that gets promoted more properly overhere as well. TRAUMA play highly impressive brutal Death Metal, with totally devastating guitar riffs, a lot of clever, yet flowing arrangements and a beautiful deep grunting voice. Except for the short (yet annoying) additionally incorporated clean vocal parts in ‘A Deep Scar’ and ‘Tools Of Mutual Harm’ the record is great all the way through. Everything seems to be constantly on a very high musical level and all of the nine tracks are even blessed with a crushing production. While listening to the album I often feel reminded on the newer Death Metal acts from Denmark, so in case you like your daily dose of brutal music performed professionally instead of worshipping a bunch of noise, make sure to give “Suffocated In Slumber” a try.