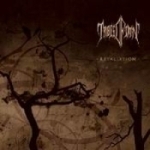 Within the last years the scene in Switzerland has become famous for its fanatic Death / Grind fever and a lot of die hard lunatics raising chaos on several festivals. If you belong to those TRIBES OF CAIN won’t be exactly what you expect, cause this quintet sounds more unique and not struggeling under the whip of Grindcore. To bring the conclusion first "Retaliation" doesn’t come up with new aspects, but it’s a 60 minutes long and in-depth sound journey with spirit and an obvious fascination for the coldness of the late 90s Scandinavian Death / Black Metal scene. Clashing cold melodies paying tributes to old heroes like OPHTALAMIA, DISSECTION, VINTERLAND or SACRAMENTUM. Partwise you can also find reminders to newer WATAIN, but all in all our Swiss musicians aren’t focused on a total dead end speed run. Strength within the compositions could easily be found in the atmospheric walls which now and then got some blast erruptions as well. There are some nice reminders to newer ENSLAVED or the old classical ULVER recordings here too, but this album needs time to be discovered clearly – take the time!!! Actually this is also one of my main critics to TRIBES OF CAIN, cause they have tons of good moments, but they should shot the bullet more clear and deadly. Well, it’s their third CD attempt and all in all it’s an album with a real soul and I appreciate that the band comes up with a positive non cliché layout / coverartwork issue, so no 08/15 standard to be found here. It’s a nice digipak for the collector hearts and the mastering of the album was done by Peter in de Betou (OPETH, AMON AMARTH and many more), while the production still have its human aspects, that fit well. I’m pretty sure that TRIBES OF CAIN could mature in the right direction when they get a bit more of an own sound character, so open your ears and eyes!!! www.tribesofcain.ch