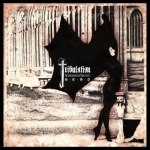 TRIBULATION
The Children Of The Night
(Century Media Records)
69:03min

A new TRIBULATION album was on my most expected list of releases. Their debut "The Horror" released in 2009 was a damn impressive take on the old school Swedish Death Metal. Then in 2013 they dropped the best avangarde Death Metal album of the year "Formulas Of Death". So how the hell you follow two such impressive releases? TRIBULATION decided to ditch Death Metal influences altogether and opted to deliver a Heavy Rock album with raspy, atonal vocals which get fucking annoying at times. You can imagine my utter disappointment about such turn of events, but I can’t be mad for too long about this, because there are many other great Death Metal releases coming this year. TRIBULATION as a Death Metal band is buried for me. But they are not the first and definitely not the last, who changed their style, just remember PYOGENESIS, ANATHEMA, PARADISE LOST, BATHORY, ENTOMBED, DARKTRHONE and so on. In case of TRIBULATION, they badly want to emulate the succes of their coutrymen GHOST B.C., but I doubt very seriously that it is possible, not with such abrasive vocals. They will still be too heavy for many people, but not heavy enough for the fans who liked first albums. Anyway, after a few more listens I tried to detach this album from the past releases and look at it as a whole new band. And in my mind I see this bombastic sounding Rock band with a dark, gothic gimmick which doesn’t really hold the attention for too long. The songs are mostly mid-paced with stripped down, hippie sounding melodies and follow similar patterns. Or to put it short – it’s a heavier and speeded up version of GHOST B.C. but with a different vocal approach, a little more varied songwriting and some very tasty solos. There are two bonus tracks on this version and one of them called ‘Laudanum Dreams’ delivers the sound and vibe of TRIBULATION’s past, it’s my favourite track on the album (the other one’s a cover of the old THE CURE classic ‘One Hundred Years’ – Frank), but in the end it loses the momentum as well. So it’s up to you to decide whether you try and start to like a new TRIBULATION style, I’m not convinced at all, but it is still worth checking out, simply out of curiosity. More info at: www.tribulation.se, www.facebook.com/pages/tribulation-official/169889709720460, www.centurymedia.com