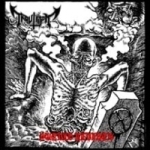 After their amazing demo this is (as far as I know) the 2nd output from Swedisch Deathers TRIBULATION. I’m not sure if they are aware of the fact, that there already existed another band called TRIBULATION in the early 90s which was located in Sweden, too. From the musical side both bands don’t have to do so much with each other, but fact is that I couldn’t get warm with the old TRIBULATION which is not the case here, as these guys know how to kick ass. This outfit perfectly fits under the banner old school Death Metal the way it was meant to be. Listening to this seven inch makes me feel like listening to old MORBID ANGEL especially when talking about the created atmosphere. And not only MORBID ANGEL, also bands like NIHILIST or MERCILESS come to my mind, though they are pretty outstanding and I don’t want to compare them to one of these bands at all, as they play the music I’m craving for – fucking old school Death Metal. But old school is not only the music, old school is also the release itself, which is a 7"EP through Blood Harvest Records from Sweden. This label is doing a fantastic job so far (check out the great NECROVATION 7"EP as long as it is available) and this vinyl is in the perfect tradition of the seven inches back in the good old Death Metal times. I mean even the layout looks like those of the early 90s seven inches. This is totally authentic and simply fantastic. Really, one of the best underground releases of the last time. This is a band which makes me feel good about the future of the Death Metal underground and now I’m looking forward to getting the remaining EPs from Blood Harvest Records as I’m sure they aren’t bad either. Waste no time and buy this release immediately as (according to their homepage) all releases on this label are strictly limited to 500 copies. Check out www.bloodharvest.se or www.myspace.com/bloodharvestrecords