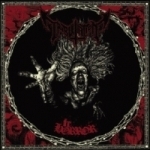 Sweden, a beautiful country somewhere in the north, was 15 years ago the birthplace of so many great Death/Black Metal bands. They often consisted of the same band members and released their masterpieces mainly via two record companies – No Fashion and Black Mark. No Fashion disappeared completely at the beginning of the new century and Black Mark is more or less – forgetting the BATHORY back-catalogue – an inoperative record label. Not too many cult acts survived the stormy last decade (MARDUK, DARK FUNERAL, DARK TRANQUILLITY) and so it’s time for the next generation of Swedish bands to add some fuel into the decreasing fire. The debut of TRIBULATION is more than mere fuel its purest kerosene. Several years ago their debut “The Horror” would be the perfect Black Mark release because one of the best Swedish Metal bands is shining through every second of their album – NECROPHOBIC. Not sure if TRIBULATION would be happy with the description Satanic Death Metal but they are also combining sheer force and aggression with evil atmosphere and so it’s completely clear why the parallels to their Swedish brothers are so obvious. What makes this debut so impressing is the uncountable amount of riffs, ideas and overwhelming power – you can find more ideas in one single song than other bands are offering in whole releases. This should not sound arrogant but if the term “Voices From The Darkside compatibility” would really exist – this album would deserve the label. Just listen to ‘Curse Of Resurrection’ and you will understand that “The Horror” is nothing less than first killer release of 2009! www.pulverised.net