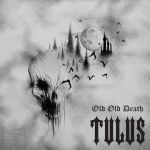 The triumvirate of TULUS, KHOLD and SARKE means a black metallic mission from the deep north. With members of SARKE and KHOLD, TULUS were formed well before these two names – it was the year 1991. TULUS were only reactivated in 2006, having with this “Old Old Death” arrived as the third album in this second phase of life. The album was recorded and mixed at H-10 Productions by Lars Erik Westby with the assistance of Per Kristian Schjønsby and mastered in Sonic Train Studios by Andy La Rocque. With 10 tracks that make up an effective 31 minutes, the themes are around three minutes in average and more is not necessary when we are faced with the direct and uncomplicated sound of TULUS. Dripping in old school Black Metal sound played at an exemplary pace as though TULUS approaching end times. What you hear here is very easy to assimilate, dealing with simple Black Metal that is guided by obviously loud voices and by guitars that astonishingly simplistic. It is utterly surprising how slithering groovy this album is without sacrificing mystery and wickedness! Instead of blizzard guitars, the commanding bass often carries the songs and takes over melody parts that it is a real pleasure. TULUS are quickly recognizable as TULUS, with unmistakably gnarled, old and pissed off aggravation. Here and there are parallels to CARPATHIAN FOREST and TAAKE, but when it comes to infectious riffs, “Old Old Death” has the certain edge. The almost Indie Rock groove like ‘I Havet Hos Rån’ is recommended as a playing tip, which outshines all other songs on the album – which are by no means bad. TULUS actually managed to get Black Metal to move rather than to stand still, as ‘Folkefall’ and ‘Grunn Grav’ hands over the melody for the most part to the bass and that turns out to be breathtaking. After a little more than half an hour, “Old Old Death” is over but ‘Hel’, ‘Jord’, ‘Flukt’, ‘Folkefall’, ‘I Hinmannens Hånd’, ‘Grunn Grav’, ‘Ild Til Mørkning’, ‘Villkjeft’ and ‘In Memoriam’ will remain with you. Released in co-operation with prestigious Soulseller Records and with cover artwork envisioned by infamous Maxime Taccardi, “Old Old Death” is certainly another triumphant statement by the Norse legend TULUS, which shall stand the taste of time. Explore more about the band at www.facebook.com/tulus-552774808225210 or visit their label page at www.soulsellerrecords.com.