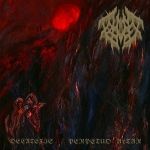 Formed in 2014 this Argentinian five piece presents their debut album with five songs of some of the most asphyxiating Death Metal from that part of the world. The name of the band in english translates to TOMB OF MEAT and although they also vomit the songs in their native Spanish, the universal language of decadent, complex, soul-draining Metal of Death is something fans of the style can be related to. It is a band that recalls bands in the GORGUTS style of complex Death Metal, but also goes into the unholy sign of INCANTATION, AUTOPSY and even sometimes PORTAL or even ULCERATE with little bits of dissonant Black Metal here and there. But make no mistake, the music and the vocals are calling for just tortuous Death Metal madness. The execution is complex, with many tempo changes, yet it does not sound forced or too complex for its own good. There is an eerie sense of melody embodied in the songs, and the upcoming damnation of the flesh is present at every note. The guitar sound is oppressing, decadent, tortuous and of corpse, asphyxiating. And every song in here, although sounding similar, has their very own aura, yet is seems the band wanted the songs to be linked in some way. Horrific Death Metal which will possess the souls of those unsuspecting victims. I know that the usual extreme Metal fan who enjoys simple things might get it difficult to digest (or be digested) by this almost cacophonous nightmare, but if you are able to knee deep in the blood, you will find a complex work of murdering art few are able to dissect. And in this type of style, these fine murderers are at the top of their game, The Apex predators! www.facebook.com/tvmbadecarne, www.facebook.com/lavadome