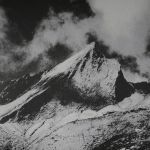 “Degen Van Licht” is the third full length album released by the Dutch Black Metal band TURIA. This band was formed six years ago and has already released three albums and three splits: totally productive for such a young band! They’re a trio with a female vocalist, a guitarist and a drummer. Their last effort, produced by the German label Eisenwald, contains five songs and two ambient tracks (an intro and an interlude) for almost 46 minutes. What style do they play? Atmospheric Black Metal with a very professional production. So, don’t expect one of those ultra chaotic and noisy bands that are pretty popular nowadays (BLACK CILICE, TETRAGRAMMACIDE etc). TURIA’s atmosphere is less oriented to violence and noise, focusing more on despair, desolation, melancholy and depression. The lion’s share, needless to say, comes from the vocalist with some very cold, tormented and spectral screamings in the vein of early BURZUM. The rest is typical second wave Norwegian Black Metal with minimalist tremolo riffs alternated to some groovier headbanging like parts. The guitar melodies are simple but effective: cold and filled with sadness and pain thanks to some dissonant riffs too. The drummer does his homework in terms of basic patterns: not particularly fast euro blastbeats and a bunch of ritualistic slowdowns. Double bass? Culpably absent. A big role is played by the production that is able to create, along with the vocals, an evocative and grim atmosphere like an haunted and foggy forest. What can I say more? Not much. The concept is based on mountains and freezing landscapes. In conclusion, do TURIA play atmospheric Black Metal? Yes. Are they violent? No, not at all, but they have some very sick vocals and a pretty obscure and dark touch, although their attempt to match the misanthropic primitiveness of early BURZUM failed. More info at: https://montturia.bandcamp.com, www.facebook.com/eisenwaldofficial