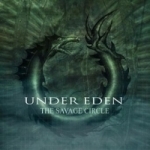 UNDER EDEN bring “together elements of American Thrash and Scandinavian blackened Death… Thrash-oriented guitars combined with furious Death Metal drumming and Metalcore attitude” – end of quote from the info sheet. Frankly said, this is one of the most useless promos I have received in a long time: half-assed generic melodic Scandinavian Gothenburg boredom (yes, here at VOICES we are sick of this crap), ok-ish Thrash parts and superfluous mallcore crap (take note: only sing with a clear voice in case you are ABLE to do it, argh!) with a muffled and dry production. Taken for themselves the parts are subpar, in total the outcome is just shit. Damn, these out-of-tune sung vocals in ‘Behind Blind Eyes’ are hilarious. I already wasted enough lines on this… avoid.