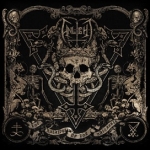 UNLIGHT
The Katalyst Of The Katharsis
(War Anthem Records)
53:25min

UNLIGHT is a Black Metal horde from South Germany with German and Swiss members and already active for 17 years now. UNLIGHT have managed to release six full-length albums in that time. Their current output has just been released via War Anthem Records and presents them four years after their last fine output "Sulphurblooded" in a perfect condition. Their scandinavian influenced Black Metal is made with love for detailed arrangements, perfect proportioned melodies, changing speeds and a good balance between Black Metal and influences of Death Metal and Thrash Metal or even slight traces of NWOBHM in their guitar solos and melodies. Influences of WATAIN or even the mighty DISSECTION, especially in the killer track ‘The Seven Libations’, can be heared in their whole guitar work as well as in the freezing mood, they try to create. This track as well as title track ‘The Katalyst Of The Katharsis’ or the in the German language presented track ‘Staub Und Asche’ and the secret highlight killer hymn, Thrash / Speed Metal attack ‘Antipole Divinity’ are real highlights of this dark piece of hellish music and the guys around mastermind Blaspherion have really once again shown their fine skills and abilities to create dark and freezing Black Metal. The fine cover artwork could also have been used by WATAIN on one of their last outputs und fits very well into their whole concept. The overall production is perfect and varying and the band shows, that melodic Black Metal is not dead and not mandatory to come from Scandinavia. More information: www.unlight.org, www.facebook.com/pages/unlight/109910895724998, www.war-anthem.de