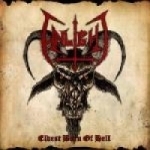 It really does pain me having to sit through an entire album from a band as Germany’s UNLIGHT, that remarkably could be so cool (take for instance the album’s closer; SODOM’s ‘Wachturm’)… UNLIGHT could be so much more than they actually are. And ultimately and surely UNLIGHT ought to be, a real breath of cold Northern frost to this overly saturated market. Yet as is the case with most newer bands in the scene, reality sets in and disappointed follows after these acts like a dribbling, drooling, lazy eyed mongoloid younger sibling hurrying after its favorite smokin’ hot older sister and playmate! Like so many others before them, and so many more to follow, UNLIGHT miss the mark altogether when speaking of knowing when to just let the Black Metal go. Instead letting each promising riff after fervorishly played riff go by without a cause for concern, begging the question to be asked of its authors – do you seriously even care about what you write? A better question would be… Do you even know how close you are to writing truly sick, memorable songs? However then just as quickly as you are onto something potentially wicked, you switch gears in the midst of it, and go back to retard-land and chuck what potential you had for a moment to the wind and thus kill the entire track outright (and rest of the album in my opinion…) with what I call the ABC’s of Black Metal. A = amateurish semi-melodious pieces, B = blitzkrieg strumming, C = counterfeit blastbeats and unintelligible screaming vokills. Freiburg / Baden-Württemberg’s UNLIGHT, who when they aren’t placating to those kids and elders alike who seem to be still mesmerized by all that is allegedly evil about Black Metal, can absolutely dig up some of the more metalized fucking riffs that these ears have not heard since the days when fellow countrymen DESASTER were new to the scene! And not too unlike Koblenz’s DESASTER, prior to DESASTER’s acceptance of real Metal, of reaching a conscious level of understanding about what it means to make your own mark upon the scene. And not fall victim to the trends beset by others. Only then did the band truly move on ahead, blazing a trail into those twisted, icy and darkened realms known as the path less-traveled. In return for this acceptance, DESASTER have climbed from the gutter to stand tall on the streets that bore them. Knowing all too well what got them there, and what got them their highly valued prize of a recording contract with Metal Blade Records, the majesty in that accomplishment, so-to-speak, was just as simple as flicking a light switch. DESASTER did not rely on the sub standard inadequacies of what other “primates” have created note-for-note. Nor did they rely solely on those who they would call brother!, that perpetuate this vile redundancy known as Black Metal. Those who have practiced long and hard to keep its plague of clamoring mediocrity ever rampant, and ever pestilent. Loitering blackened death, whispered in the shadows of city and township slums the world over, blaring falsified popularity over hot winds of carrion, to gain not only more fans, yet be sure to be witnessed by the legions of faithful already converted and who take these ABC’s as a real accomplishment when they are nothing more than pure chicanery! Contact: Unlight@unlight.org, www.myspace.com/unlightblackmetal, www.heavyhorsesrecords.de