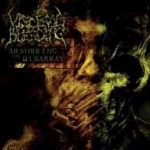 How I feel about VISCERAL BLEEDING, and their latest contribution here, to the score of CDs that I have reviewed this week, is the exact same that can be and was said about their fellow countrymen AEON, of whom I recently ripped their throats out in a review for their latest and grossly unneeded album “Rise To Dominate “. Granted VISCERAL BLEEDING escape that savage attack to the neck for not being signed to Metal Blade, and thanks be to whatever god didn’t make that happen, and yes VISCERAL BLEEDING are indeed a better band talent-wise than AEON, meaning that to emulate and rip DEICIDE off almost note-for-note is absolutely nothing in comparison of the skill level required that it takes trying to sound dead on to SUFFOCATION. The point of contention here is the fact that the world doesn’t need anymore clone bands! If any of our readers was alive, cared enough or and were following the trends of what was happening within the underground back in the early to mid 90s you’ll remember the explosion of bands, from the States in particular, that couldn’t write an original riff to save their souls! They not only looked like they played in DEICIDE / MORBID ANGEL or SUFFOCATION, but they sounded just like them too! Often went so far as to use the same gear as any of those three bands mentioned, wrote their music and lyrics often the very same way and even some took matters a step further and went to the extreme of conducting themselves in public like their heroes! Obnoxious to say the very least! And may I add that reviewing all these counterfeit bands was no easy feat! You think it is bad now, swatting at all these god damned godforsaken third and fourth rate Black Metal bands these days!? You try reviewing demo after demo, CD after fucking CD of these plagiarists instead on a daily basis and see if you don’t go a little bit crazy! I tell you the only good that became of these acts, these forgeries, was that I could sell ’em to the local music shop down the street for few dollars a piece! Hallelujah for that! Because otherwise I’d be up to my elbows in counterfeit bands and their weak ass compact disc attempts! Now… getting back to VISCERAL BLEEDING. I get the fact that VISCERAL BLEEDING might take the skill level compliment of sounding like SUFFOCATION mentioned above, as a compliment, albeit back-handed compliment, but a compliment all the same, when in fact it really isn’t. The point that you all blatantly copy a known band, and especially one that has been in the American Death Metal scene since damn our scene’s Death Metal’s infancy, almost, is really shit. Even if you try to saddle your expected retort to this review with the half-ass argument that your music is written the way it is, in more reverence than anything else, the facts as they are before us just will not stand. Copying SUFFOCATION to the degree that you do, not only musically but also lyrically, and even title your songs accordingly as well… Songs on this reviewed disc as ‘Disgust The Vile’, ‘Despise Defined’, and ‘Awakened By Blood ‘. I would wager what meager funds in my wallet, that I don’t really have to gamble at present, that if you were to play your band’s CD either before or after a SUFFOCATION disc to a blindfolded man, who doesn’t even need to be a fan of extreme Death Metal, my money is still in good standing that even he probably couldn’t tell their was a distinct audio difference of one band to the other! I’ll also wager a few dollars more that if you were to play this particular disc in review today, in a club setting, at a SUFFOCATION gig, and knowing what I know of that band and its members who do like to hang out and talk with those Metalheads who showed up to see them backstage. I would wager these few extra dollars more that you could easily trick one or more of that band. Who for the sake of this story mayhaps weren’t paying the utmost attention to what was going on around them at the time and / or weren’t sure when exactly they were supposed to go on, and heard “Absorbing The Disarray” blasting from the club’s speakers. That they just might turn their head in disbelief towards the stage and think for a split second that their own band went on without them! Funny as that might sound, that really isn’t cool or anything to be proud of. If any advice can be given to VISCERAL BLEEDING it would be this. STOP! Stop with the SUFFOCATION wanna-be shit and take a year or two off and discover your own sound. This CD proves without a shadow of a doubt the level of each member’s musicianship and that you can handle your instruments with surgical precision. And from what I see off your websites your obvious diligence with that and fact that an independent has signed you, and that you all play out constantly tells me you are more than serious enough or more so than any average band. So why do you waste your time like this by not putting forth the real effort to forge your own path and instead be remembered for that? There is no honor in being the best carbon copy of another’s Metal band. A plagiarist is still a plagiarist. Contact: info@visceralbleeding.com or www.visceralbleeding.com or www.myspace.com/visceralbleeding