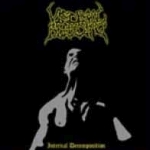 VISCERAL BLEEDING is a four piece act from Sweden, that originally started out in the late 90s as a typical Swedish Death Metal band in the vein of DISMEMBER and HYPOCRISY. They, however evolved into something way more brutal pretty quickly and could nowadays easily be compared to old SINISTER, SUFFOCATION or CANNIBAL CORPSE. The four song demo CD-R "Internal Decomposition" is their first release and because of its deep grunting vocals, intense drumming and shredding guitar work it should easily appeal to fans of the aforementioned acts. It was recorded in the fall of 2000, the production is quite ok sounding (should be improved though) and the packaging of my copy just comes with a coloured photo copy. Don’t know if you will get the "real thing" if you order it, but feel free to ask. Available from the band now, no prices mentioned. For all further info check out: www.visceralbleeding.com