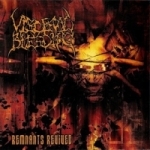 I don’t know for sure why this album went out of print in its original version so quickly… I mean, UK’s Retribute Records used to release it back in 2002 as “Remnants Of Deprivation”, but as soon as the band was picked up by the promising new label Neurotic Records for their follow-up full length “Transcend Into Ferocity”, the rights probably got sold from one company to the other. So, VISCERAL BLEEDING is fully connected to Neurotic now. Those of you who missed out on the original (for further details check out the review somewhere else on this page) shouldn’t worry too much as this re-issue turned out pretty exciting, an increased playing time and definitely offers even more value for your hard earned money. The whole disc comes as a digipak now, still features all the lyrics, got totally remastered and has got quite a lot of bonus material on offer. First of all there’s two cover tunes by CANNIBAL CORPSE (‘Stripped, Raped And Strangled’) and DISMEMBER (‘Dreaming In Red’)… While the first one seems to be a pretty obvious choice, considering that VISCERAL BLEEDING most certainly do appeal to a similar fan base musically, the DISMEMBER song remains a little bit of a mystery to me. Even though it’s done with class, an older classic of those guys would probably have been the better choice as ‘Dreaming…’ is way too melodic and therefore doesn’t really fit VISCERAL’s own style that well. The re-issue also features the album track ‘Carved Down To The Bone’ as a re-recording (rather superfluous, as the original was convincing enough already!) as well as a promotional b&w video clip of it. Done quite professionally, yet not as convincing as their clip for ‘Fury Unleashed’ (which is to be found on “Transcend Into Ferocity”). And last, but not least you’re getting three live video clips (‘Trephine The Malformed’, ‘Fury Unleashed’ and ‘All Flesh’), recorded at the La Locomotice club in Paris while VISCERAL BLEEDING supported OBITUARY. The sound is quite good, yet very raw and the overall impression to me an obvious proof that the guys are certainly highly skilled musicians, but they still seem a bit insecure in a live situation (let’s blame it on their pretty young age…). Nevertheless, all in all this is a really cool re-issue that you should definitely pick up, either if you originally missed out on it or if you’re a fan of the very brutal US style Death Metal! www.visceralbleeding.com, www.neurotic-records.com