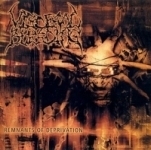 Wow, what a big improvement! VISCERAL BLEEDING from Sweden already used to sent us their demo CD-R “Internal Decomposition” a while back, which featured four tracks of brutal US-styled Death Metal in the well known SUFFOCATION / CANNIBAL CORPSE vein – but not necessarily knew to convince me completely yet at the time. Luckily things have changed for the better with the release of their first full length album “Remnants Of Deprivation” now. Next to the five brand new tracks, all four demo tunes got re-recorded with a far better, and this time totally crushing production. I’m not quite sure if that was maybe the main problem with the original versions or if the band simply matured so much as musicians ever since the release of the demo (probably both!)… Fact is that “Remnants Of Deprivation” delivers approx. half an hour of very well composed and always totally tight performed brutal Death Metal, that never ever reveals the origin of the band, but comes across as lethal sounding as all their American counterparts. The professional looking cover art by Mike Bohatch (EYES OF CHAOS) fits the overall rather sick atmosphere pretty well and the band’s weird sense of humour constantly shines through in the vocal delivery (a soon-to-become trademark of singer Dennis is his “laughing dog” type grunting in between the usual lyrics) as well as in the banjo (!!) solo in ‘To Disgrace Condemned’. In case you’re having problems in finding the album in your area, feel free to contact the label (www.retributerecords.com) or band (www.visceralbleeding.com) directly. It’s definitely worth the effort!