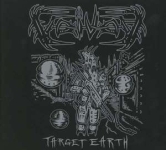 VOIVOD has always been a strange size, in more than one way. Sci-fi Thrash Metal when the world really wasn’t ready for it, when they became ready the Canadians shifted to a more progressive way to deliver their music, as it wasn’t far enough out there from the beginning, and then it has been a bit back and forth through out the releases. I have never been one of the avid followers of VOIVOD, but have been enjoying their music quite a bit during the years. The last album I got really into was "Katorz", a bit intrigued about how Jasonic would bend the sound of VOIVOD, now when he had been with the band a while, and how the recordings with the late Piggy (RIP) would be used in the greater whole, and was taken in by the quite punky and Rock’n’Roll feel the record had to it. Quite straight ahead for VOIVOD and very well done. A catchy, groovy and rocking album, which I still occasional enjoy. To be honest, I’m not even sure I noticed that the band released "Infini" and if I even have given it a spin, though I reckon that day will come, after having spend some time with the Canadian’s newest output "Target Earth". A rocking sci-fi adventure with a industrial thrashy feel to the riffing, even though the bottom is quite Rock’n’Roll and straight ahead, a grooving modern Thrash adventure, blending the good old past with the more modern pastimes of VOIVOD. How do a band like VOIVOD reinvent themselves and live up to the hype? A band that have evolved and progressed more than most bands dream to ever do? They, of course, go back to the roots, without losing the modern groovy rocking touch and make a diverse and schizophrenically record from those premises, a record that leaves you, damn, is that some old VOIVOD recordings and at other times, the perfect continuation of "Katorz". VOIVOD has done most of what the band is capable of, as they explored quite some paths early on in their career, though the old boys still know how to craft a catchy and interesting tune, and of those we have 10 on "Planet Earth" (plus two live bonus tracks on the digibook edition which the playing time and cover art above is based on: ‘Target Earth’ and ‘Man In The Trees’, a cover of DIE KREUZEN – Frank). A nice Rock album with some heavy and progressive thrashy roots, all in done a aesthetic manner that screams vintage VOIVOD, I’m satisfied and intrigued, and if they carry on as this, I want more, this is quite well done and interesting. www.voivod.com, www.facebook.com/voivod, www.centurymedia.com