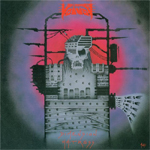 Here we have the third part of the recent VOIVOD deluxe reissue trilogy via Noise / BMG. On this album the 4 piece really took their whole sound and concept to a different level. The musical world that VOIVOD inhabit became even more bizarre and weird. Their sound plunged further into the depths of cutting edge and pioneering experimentation, boldly going where no other Thrash band had gone before and really pushing the musical boundaries of not just their own sound but the Thrash Metal genre in general. They forged a path for other bands to follow by bringing in more progressive elements not just riff wise but also with the drumming, with tribal beats being used to great effect on the aptly named ‘Tribal Convictions’ for example. And this album was where this Quebec quartet really came into their own in every aspect. They had the mix of all out Thrash and bold experimental elements honed to potent and perfection unleashing another powerful musical beast that had grown a few more heads over the years and saw the band become a dominant force in the Metal scene garnering critical acclaim and praise and turning heads with their unique take on extreme Metal. The harshness and gruffness in the vocals of Snake had almost disappeared on this recording and got replaced with a smoother more melodic and refined approach. That does complete the transition the band made from punked up Thrash to progressive avantgarde Metal pioneers. "Dimension Hatröss" is where VOIVOD really take their music into another dimension, literally. The 2nd audio disc contains a complete live show from Montreal in December 1988 full of old classics and a DEAD KENNEDYS cover of ‘Holiday In Cambodia’. The audio section of the DVD features the "Dimension Hatröss" demo from 1987, while the video section has footage from various shows in the USA in the later part of 1988. It gets completed by artwork and live / studio photo galleries and a thick booklet full of old photos, liner notes etc. So, just like the other reissues it is an absolute must for the die hard VOIVOD fan due to the abundance of extras included. All additional info you will find at www.voivod.com, www.facebook.com/voivod, www.noiserecords.net