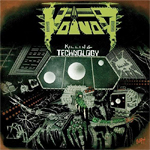 The second album in this batch of deluxe reissues is "Killing Technology" an album that really saw VOIVOD begin to come into their own musically, it marked something of a musical crossroads between the raw punked up Thrash aggression of their earlier works and the more experimental approach and sound that would ultimately define and shape their overall sound. There is still plenty of the straight forward Thrash attack found on its predecessor "Röööaaarrr" coupled with the distorted, dissonant and twisted riffing of Piggy and the experimental side of things is much more evident, rearing its ugly head throughout, the drumming of Michel "Away" Langevin really starts to take on a life of its own here and Snake’s vocal style is starting to develop more layers and depth as is the music and songwriting. On "Killing Technology" VOIVOD take the listener further into a nightmarish futuristic soundscape where strange creatures and landscapes are ever present and songs such as ‘Ravenous Medicine’, ‘Killing Technology’ and ‘Order Of The Blackguards’ would become future classics and are a constant in the VOIVOD live set today and amongst fan favourites. The production on this album is bold but brash, clear but caustic and gives each instrument plenty of room to be heard clearly, the guitars really cut sharply through the mix and the whole sound has been bolstered by a top notch re-mastering job which makes an already strong album sound even more powerful and potent. This album was by far their most daring at this point in their career but was still very much a Thrash Metal sounding album compared to what would follow only a year or so later. The 2nd audio disc contains a full live set from the Spectrum in Montreal from September 1987 which is full of VOIVOD classics and shows a band in their youthful prime full of energy. The DVD extras on this release include an audio section with a live show from Belgium in 1987, while the video part has shows from USA, Switzerland, Germany, France and Canada which are mostly very rough and ready quality wise, and there is also slideshows featuring various art and live and studio photos. The whole release comes packaged very nicely with a thick booklet full of old photos, liner notes etc. A must for any die hard fan due to the huge amount of extras included. More information at www.voivod.com, www.facebook.com/voivod, www.noiserecords.net