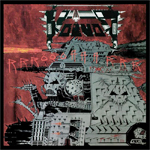 "Röööaaarrr" is the second of VOIVOD’s more raw and punky early and formative outputs, the Punk influence of the likes of DISCHARGE, GBH etc is very evident on the follow up to their debut "War And Pain" and they mix the fast and raw punked up sections with the extreme metallic aggression of Speed / Thrash Metal, add in some quirky parts in typical VOIVOD fashion and you have an album that was already sounding very different compared to their peers. The experimentation that would become so integral to the albums that followed is already starting to show on this album albeit in a more primitive and unpolished form but parts of songs such as ‘Ripping Headaches’ already demonstrate a clear use of dissonance and the unique riffing techniques and style of the much missed Denis "Piggy" D’Amour that would define the band’s sound in the late 80s / early 90s years and beyond. VOIVOD even at this stage in their career were carving out their own musical niche whilst injecting enough raging and ravaging headbanging Thrash to fit perfectly into the mid-late 80s Thrash / Speed Metal boom but creating a musical melting pot of sounds that would set them apart and make them stand out from the influx of new Thrash bands on the scene at the time. The vocal attack of Denis "Snake" Belanger on this album sees him snarling and spitting out words in a gruff manner something that would slowly be removed from his voice over coming albums but on this recording he is mixing punked up vitriol and throaty Thrash viciousness vocally on tracks such as ‘Fuck Off And Die’, ‘Ripping Headaches’ and ‘Thrashing Rage’ that make this sophomore VOIVOD album a primitive but powerful gem in extreme Metal history and the VOIVOD back catalogue. The 2nd audio disc contains a whole live show from the "No Speed Limit Weekend" in 1986 at The Spectrum in Montreal which features a set full of classics from the first 3 albums and is a must listen. To top off this 3 disc set there is an extensive DVD. The audio part of it includes the "Rrröööaaarrr" rough mix demo from 1985, their first ever live show from 1983 (which is extremely cool to listen to since it features lots of cover songs by MOTÖRHEAD, VENOM, TANK, RAVEN, JUDAS PRIEST etc. – Frank) and early rehearsals. On the video part of the DVD you get their first ever show in the USA from 1986, various other early shows in both the States and Canada and some slideshows of artwork and live and studio photos. The live video footage is very roughly recorded bootleg quality for the most part but is a must watch for any die hard VOIVOD fan. The whole release is beautifully packaged featuring an in depth booklet with old photos and liner notes. More about VOIVOD at www.voivod.com, www.facebook.com/voivod, www.noiserecords.net