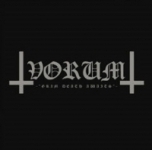 A grim punch of death, is indeed awaiting whoever puts this record on the player. This Finnish band delivers straight on old school Death Metal, as our ancestors would have liked it, with that certain Finnish dark and disturbing touch, no other country so far has accomplished to copy. This release dates back to 2009, though it certainly deserves some words, especially now, when the band is about to have their debut full length "Poisoned Void" released by Woodcut Records. Slow droning riffs evolve into grinding and raw punishing noise, the bass rumbles just below with an antagonising hum, the drums are pounding and the grim growl rapes your ears, it speeds up, attacks, leaves you trambled on the ground, to slow down and start all over. A nice mix of slow and doom-laden raw Death Metal and mid-tempo bashing, dark and atmospheric and quite enticing. VORUM is a band to watch if you’re into Death Metal, they are delivering their music without compromise, taking an old proven recipe, deconstructing it, to rise as a new beast, with even more anger and intensity than the old hordes of Finish Death and Doom. A quite refreshing punch in the face. Even more Death awaits at: www.vorumdeath.com, www.facebook.com/vorumdeath, www.woodcutrecords.com