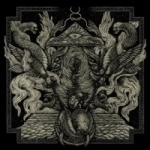 Death appears in many forms. VORUM hailing from the Åland Islands, Finland (or Åland, is an autonomous, demilitarised, monolingually Swedish-speaking region of Finland, just in case someone wants to know), come furiously raging in all doors being blown wide open: these grim deathsters’ long-awaited debut album, "Poisoned Void", is finally out! The question is, however, does "Poisoned Void" reclaim all those expectations that were heavily targeted towards it for the last past 3 years or so? Well, worry not because it does. If you ever liked VORUM’s 8-track mini-album "Grim Death Awaits" that came out in 2009, I could almost swear that you’ll like "Poisoned Void" even more. VORUM still count strongly on an old school Death Metal approach on "Poisoned Void", which I guess shouldn’t come as any surprise to any of us, but they have also sucked in a bit more blackened twist into their new songs, kind of reminding me of WATAIN at times, in a good way I mean. Fear not, VORUM still keep their boots heavily and deep on the brutal and grim sounding Death Metal territory like you may remember them from the days when the "Grim Death Awaits" was thrown on our way. It’s just that this time VORUM have added some a bit darker and somehow even more grim-oozing flavors into their sound; hence "Poisoned Void" ends up proving to be such a beautifully storming Death Metal release one could easily ejaculate for, let’s say, just in the name of well-executed and very convincing, darkened old school Death Metal. There ain’t any weak or dull ingredients involved on "Poisoned Void"; the dirt these relatively young fellows have been digging up from the thousands of times raped graveyard is the first quality, pitch-black dirt – containing a sweet amount of the rich smell of decay and death – and damn do we like to get some of this for ourselves too? Of course we do. Hats off for the VORUM horde for this luxurious sounding slap of slightly blackened Death Metal. Sweet poisoned sweet void. VORUM’s cave of death: www.vorumdeath.com, label: www.woodcutrecords.com