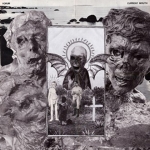 Finally (to me) the best old / new Death Metal band hailing from Finland is back, now with an EP that is full of obscure and twisted Death Metal played and executed in its own personal way, not copying anyone or trying to sound like anyone else. When “The Poisoned Void” was released back in 2013 I was looking around the Dark Descent webstore, when I saw this magnificent piece of art that just made me go “wow” and wanted to listen to that record no matter what the band played. To my surprise it ended up in spot 5 in my top ten 2013 list. Dark Descent released some great Finnish music like KRYPTS, CORPSESSED and GOREPHILIA, but VORUM was something unique. A mix of raw and obscure Death Metal in the vein of early INCANTATION, DEAD CONGREGATION etc., but the band added some weird and obscure sense of melody reminiscent to what their Swedish peers were / are playing. So, two years passed and now VORUM is part of the mighty and more suited label for their style, Sepulchral Voice. Just a couple of weeks ago the band released some sort of distorted and uncommon painting, made me think it was something they wanted to show to the world in form of a new song, but the release of this new EP was announced. And here we are, trying to review “Current Mouth”, as it might be one of the most difficult releases to be reviewed, even from an open minded Metal fan. Let me start with this: VORUM made something different this time around, but retaining the punishing oppressive music they are known for, adding basic and common riffing and drumming patterns mixed with the raw and brutal musical assault the band is known for. I can guarantee that fans of Punk and early Heavy, Thrash and Black Metal will find something interesting in this EP, making it a very hard record to digest in the first couple of spins. This is not only a grower but also a unique dark masterpiece that will sure take this band to the next level. This little taste of obscure Metal of Death is only an appetizer for what will come with their next album, probably next year. Any fan of DEGIAL, INVIDIOUS, ENSNARED, etc. (but with an open mind) will love this EP. If you are not familiar with those bands check this release first as it will give you a top reference on what all those bands share, but with a wider and catchy execution. Go check this out and buy it at: www.facebook.com/vorumdeath, www.sepulchralvoice.de