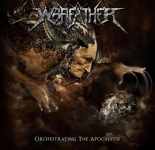 Steve Tucker had a stint of 5 years in MORBID ANGEL (1997-2001, 2003-2004) as vocalist and bassist until he was replaced again by the original MORBID ANGEL member David Vincent sometime around in 2004. Steve’s stint in MORBID ANGEL pretty much split opinions among the fans: some liked his voice and whole being in this veteran Floridian Death Metal act, while some others not so much. After MORBID ANGEL Steve got involved with a New York based Death Metal group called NADER SADEK as vocalist, releasing their debut album "In The Flesh" on French Season Of Mist in 2011. WARFATHER is Steve’s recent complex sounding Death Metal act that he put together just in 2012. Once being the frontman in one of the most respected Death Metal bands MORBID ANGEL, it’s just natural that there’s always some hype there whatever Steve does music wise. So the important question is, is WARFATHER’s debut full-length studio recording titled "Orchestrating The Apocalypse", worth all that hype then? I would say it’s both yes and no. First off, it must be said Steve has got a very powerful voice; his Death Metal grunts are surely one of the most convincingly grunted vocals out there these days, let’s say being in the same league with Nergal of BEHEMOTH, or Peter of VADER – or Erik of HATE ETERNAL; a voice of true barbaric instincts, out for flesh and blood so to speak. When it comes to the music itself on "Orchestrating The Apocalypse", that’s a way more tricky task to get analyzed through. There are many things on this particular record that undoubtedly appeal to many listeners, like a heavy use of different tempos within the songs – from slower sections to furiously raging blast beat parts (that tend to be all over the place on this album, unfortunately), plus getting all of those somewhat bizarre effects incorporated into the songs too, which definitely bring in something a bit more special to this record, both in good and in bad. At times it feels like the album becomes just a bit too effect-ridden effort, stealing the main focus on "Orchestrating The Apocalypse", especially when they seem to be placed in a not so fitting way into the songs. Some light headache is also caused by the mentioned constant, head-striking blast beat attacks that come straight on our faces very often. With a lesser use of them, some songs would have certainly worked out far better, I believe. As for some more positive notes about "Orchestrating The Apocalypse", if you are a fan of pure, hateful American sounding Death Metal, then you get a full dose of it – and even more for sure. But then again, I cannot help it but within a certain time "Orchestrating The Apocalypse" becomes sadly a little bit pedestrian and long-winded sounding, making me to think whether Steve and co. should have stayed a bit longer on the drawing board before entering the studio to record the album? The fact, however, is "Orchestrating The Apocalypse" is still too far from a true successful home run that would be rejoiced at people’s homes for many years to come. Well, to each its own, I guess. For more information on WARFATHER, go to: www.facebook.com/pages/warfather/240931366011521, label: www.greyhazerecords.com