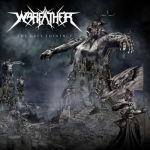 I think anyone here is familiar with the name Steve Tucker for his times in MORBID ANGEL, where he always stands in when David Vincent leaves the band again. Even though he was mostly overshadowed by his predecessor, Steve did fine albums with the pioneers of all Death Metal. Yours truly, for example, enjoyed “Gateways To Annihilation” very much thanks to the fact that it was damn close to my personal idea of how MORBID ANGEL should sound. The return of Mr. Tucker to the band’s line-up gives hope for a change to the better after the “Illud Divinum Insanus” disaster. “The Grey Eminence”, the recent album of his own band WARFATHER, where he switched from four to six strings, gives these hope additional wings. From the first notes of the opening ‘Orders Of The Horde’, the four piece delivers finest food for lovers of complex Death Metal the American way, with all ingredients needed. Delicious changes of speed, tasty riffs and savoury vocals always make up a very enjoyable meal, especially for gourmands of the Floridian kitchen. Additionally, this meal is flavoured with a fine dose of raw brutality. Despite an undeniable closeness to his other band, Steve and his Brazilian partner in crime Avgvstvs have given WARFATHER enough individuality so they aren’t a clone of the omnipresent benchmark of Mr. Azagthoth. It’s not only the missing of the ludicrous riffing and the subliminal megalomania, but also the more to-the-point way of songwriting that makes “The Grey Eminence” a fine and distinct album. Thus I can recommend songs like the fine ending triple of ‘Carnage Of The Pious’, ‘Grey Eminence’ and ‘Fair And Final Warning’ or ‘Judgement, The Hammer’ without concern. If you feel addressed, check out the band at www.facebook.com/pages/warfather/240931366011521 or their label at www.greyhazerecords.com