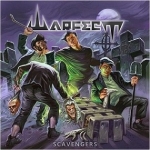 The Swedes know their Metal. They really do. They don’t fuck around. And when it comes to Thrash, WARFECT have it down pat, I’ve said it many many times. We listen to Metal to bang our heads, to feel the fury boil within us, from beginning of each album to the end. No sound effects and ambient crap between songs, no long movie samples, no pianos or acoustic guitars in places they shouldn’t be. Just kick-ass thrashing straight through. And WARFECT understands all that. Except for the end. But I’ll get to that. ‘Purveyors Of Cadavers’ shifts into gear immediately with a full-speed Thrash filled guitar assault. ‘Reptile’ charges head on with the same ferocity. Fredrik Wester spits out vocals L Ben Falgoust style, while a quick Punk chant pervades the track at just the right moment. Wester’s full-throttle guitars kick you in the face as Manne Flood’s ricochet drumming drop-kicks you in the balls. ‘Suffocate The Chosen’ keeps the blood flowing in a mosh-filled haze. ‘Predators’ knocks you flat on your ass with more galloping Thrash and anthemic fist-pumping. If "Scavengers" would have ended after ‘Skin Bound’, all would be good with the world. A good old fashioned 45 minute bludgeoning. However, the last two tracks drag on and make the album seem a little too long. ‘Evil Inn’ meanders, wanders and gets lost in an unlikely non Thrash track that isn’t bad on its own, but doesn’t fit into the aural assault of the first eight tracks. Next track ‘Savaged By Wolves’ picks up the pace again, but by now the album has lost its momentum from the previous track. The final track slows it all down again with ‘Into The Crypt’. But you know what? Maybe it’s just me and my anal complaining for a perfect album from beginning to end. Overall, if you like your Thrash the way it’s supposed to be, give "Scavengers" a try. For more band information, check out www.warfect.net, www.facebook.com/pages/warfect/43091147123, label contact: www.cyclone-empire.com