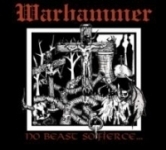 This is the reunion from Hell! Apparently singer Volker “Iron Lung” Frerich decided to dig WARHAMMER back from the grave and give out another dose of Necro Doom Death Metal of Apocalypse to all old school maniacs out there. And you don’t have to worry, new guitarist Kevin “Lord” Wittek doesn’t mean a change in the WARHAMMER style, this is still pure HELLHAMMER worship with bits of UK crust like DISCHARGE and US Punk like CARNIVORE (CARNIVORE = Punk? – Frank) thrown in for a good measure. Starting with the promptly named intro ‘The Slaughter’ WARHAMMER launches into full battle mode with classic Speed Metal tinged ‘Doomsday Inferno’ and from there on there’s no stopping and looking back! You get mid-paced to faster treatments like ‘Flames Of Armageddon’, one riff killer workout ‘Total Maniac’ and the quite varied ‘Frozen Screams’ (by WARHAMMER standarts, of course!). Then there’re the usual doomish ‘The Bloodstained Shadow’ and my favourite track ’30 Pieces Of Silver’! Basically, all those elements that made you to praise WARHAMMER are all there and intact. The production is solid and heavy, no complaints here! The closing track ‘The Tunguska Riddle’ is the most original thing this band has ever done, but I won’t give out what it is, get this album and hear for yourself! It is also the first WARHAMMER album which was self-released, so you can buy it directly from the band and show them your support! I know there are a few bands carrying on the HELLHAMMER legacy, but none of them do it with such style and conviction like WARHAMMER, who in my opinion, transcended their mentors and became a much stronger force on their own! Hail to the Beast! Contact: www.myspace.com/warhammerdeathmetal