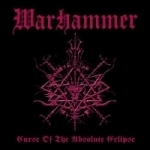 The total destruction of the earth Part IV… Our buddies of WARHAMMER are in the meantime also already a part of the underground Metal scene for quite some years and with "Curse Of The Absolute Eclipse", just released their fourth longplayer. Just as on their previous albums, WARHAMMER sticks to the apocalyptic Doom sound of cult-band HELLHAMMER and they do it with class. Sometimes it’s really remarkable and astonishing how close they get to the sound of their beloved and worshipped band. WARHAMMER hardly changed anything in their approach and that’s fine with me because why change anything when their approach works? When you listen to "Curse Of The Absolute Eclipse", you don’t give a penny anymore about the future of mankind and that’s probably also the intention. Very heavy and very morbid-sounding, WARHAMMER seek their way throughout this album. To my humble opinion, they are at their best when they play very slow and grind everything that crosses their way (‘The Grave Hill…’). "Curse Of The Absolute Eclipse" has the best production so far, the album is by far the best sounding WARHAMMER album so far without losing their integrity or power, which is a good thign in my book. WARHAMMER Deathdoom forever!