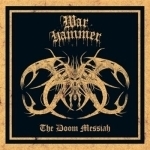 You probably might ask yourselves whether it really makes sense to have the HELLHAMMER worshippers doing several albums with one and the same idea in songwriting?! I personally don’t think it’s as bad as that because WARHAMMER is actually getting better and better with each record. "The Doom Messiah" is their third full-length and of course it once again carries forth the obscure feel that HELLHAMMER used to create some long time ago into the pretty different musical scene we are facing these days, which gives WARHAMMER the big advantage of being a pretty outstanding and easily remarkable act. WARHAMMER deliver their best musicianship (still quite rough and primitive, but that’s what their music demands after all!) and catchiest morbid songwriting here which additionally comes in the most powerful and most suitable production they managed to achieve so far. Outstanding tracks are the speedy ‘Shadow Of The Decapitator’, the bonecrushing midpaced ‘Cries Of The Forsaken’ and the straight forward attack ‘The Skullcrusher’. I don’t know if others will agree but I also discover a lot of early UK Crustcore, some CARNIVORE and old school Punk influence here, which is actually cool with me! The only thing that is rather annoying on this release is the pretty "arrogant" sounding liner-notes by the band themselves in the booklet… other than that a very enjoyable release of pure old school spirit, no technical bullshit at all and also really cool in packaging, so go grab a copy in case you wanna support a band that still fights for the early, evil days of extreme Metal!