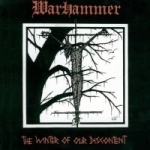 WARHAMMER
The Winter Of Our Discontent
(Dead Center Productions)
59:13min

Back in 1997 a small treat was released. At least for a Metalhead as myself that had been into HELLHAMMMER since the first tones of the band had hit my ears back in the day. HELLHAMMER did release quite some material, when you have the small 2 years they existed in mind, though not nearly enough to satisfy the hordes of HELLHAMMER fans that emerged, both back when the band was around and up during time. Though then in 1997, more or less out of the blue, enters WARHAMMER, a band that displays what HELLHAMMER was and what HELLHAMMER might could have developed into, if they wouldn’t have developed that much. Not that there haven’t been bands trying to kick it HELLHAMMER style, though not any, to my knowledge, that dared to take it all the way and keep it as obvious as it is with the Germans in WARHAMMER. The mad Brazilians in APOKALYPTIC RAIDS are nearing the standards, though are not all there yet. It is incredible how the Swiss band in their short time of existence has influenced the Metal scene. Their, back then, new take on the music with their heavy and fuzzy guitar and bass sound, pounding drums and devil spawned pukes and grunts from Tom G. Warrior together with the strong song structures with great hooks and dark gloomy doomy atmosphere, caught on, and have continued to do so since then. Now we can ask ourselves about what WARHAMMER brings to the table? The simple answer is: not much, as the music is more or less a copy of what HELLHAMMER created in terms of song structures, sound and thematics. Though WARHAMMER have soul, their music reeks of soulbound music, intense and pure admiration of what they (re-)create, and that drives the music, creates the atmosphere and touches the listeners. "The Winter Of Our Discontent" is where it all started for the mad Germans in WARHAMMER, together with their "Towards The Chapter Of Chaos" demo, both released in 1997, now assembled on one release, this re-release of the somewhat legendary debut from WARHAMMER. "The Winter Of Our Discontent" is perhaps the weakest of the band’s 3 first albums, but still a damned classic that just becomes better the more it is getting played, and the "Towards The Chapter Of Chaos" demo is ace as well, with the somewhat darker and bit more muddy sound, and a fine fine basstone, I could listen to ‘Predictions Of Doom’ for days. Something that marks a classic, is when the music is enjoyed as much 15 years after the release, as when the music was released, and I’ve digged dusting of WARHAMMER and getting back into the grave to review this re-release, the music still stands strong today, long live the legacy! If you aren’t convinced, check out one of these sites www.myspace.com/warhammerdeathmetal, www.facebook.com/pages/Warhammer/185701628126592, www.deadcenter666.com and prepare for an intervention, and remember: "Only death is real…"