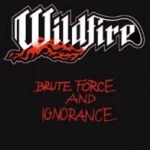 If you ever checked out the STATETROOPER interview that we posted on this site not too long ago you should already be aware of this band as the whole line-up (minus frontman Paul Mario Day) was hired by former MSG frontman Gary Barden for his newly founded project. Vocalist Paul, who had previously been fronting MORE, already made a big impression on me when I saw the band open up for SAXON way back in 1981 on their "Heavy Metal Thunder" tour in Germany. I still remember that I went to a record store a couple days after the show, where I picked up a copy of BULLET’s "Exection" (who were also supporting SAXON) as well as MORE’s debut album "Warhead", which had just come out on Atlantic Records at the time. But for some reason I enjoyed BULLET on record a lot more (probably because they were a lot more aggressive with their AC/DC meets ACCEPT type style) and therefore didn’t follow MORE’s activities afterwards anymore. I never checked out the two WILDFIRE albums "Brute Force And Ignorance" and "Summer Lightning" either, on which Paul Mario Day was singing after quitting MORE. Big mistake!!! But thanx to the resurrected Mausoleum label, who recently re-released a bunch of old classics, I finally was able to check them out approximately twenty years after they originally came out. On the debut "Brute Force And Ignorance" WILDFIRE were still playing a very basic form of traditional Heavy Metal, never as guitar dominated as MAIDEN for instance, but still strong enough and blessed with a bunch of great melody lines to be able to stand out among the big masses of NWOBHM acts that were releasing albums at the time. From todays point of view Day’s vocals on here partly remind me a bit on Jon Deverill (TYGERS OF PAN TANG), while the songs themselves may not have been perfect yet, but still stood the test of time (a fact which the production doesn’t). And due to their nicely balanced mixture of heaviness and melody still sound very entertaining, even today. Musically as well as production wise 1984’s follow-up "Summer Lightning" is a big step forward: more powerful, yet more catchy and melodic (mainly due to the more dominant backing vocals) and with a more exciting, emotional kinda THIN LIZZY – like twin guitar attack. Both albums come up with liner notes, a bunch of old pictures and "Summer Lightning" even features a bonus track (the ballad ‘Jerusalem’), which originally came out on a limited edition single and therefore should be quite difficult to find these days. Considering all the crap that gets released these days, it seems about time that I also give MORE a second chance now as well… Anyone out there re-releasing the band’s back catalogue maybe? For further info contact: www.mausoleum-records.com.