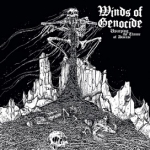 I like when my prejudice takes over. When I first laid ears upon this album, my first thought was yet a Swedish band, yes I rarely do research on a band that I don’t know, before I’ve given the album a listen or two. The sound together with the fact that "Usurping The Throne Of Disease" is released on Pulverised Records, the Singaporian legion that have a great nose for good Swedish acts, told me that this must be a Swedish. So I was a little surprised when I did a little research and found out the band is hailing from Britain, though perhaps not so surprising, as they have a long proud history of Punk and mixing it with Metal. A good fierce and energetic album with a tour de force of what have made crusty Death Metal a beloved and adored genre, and a Swedish band or two quite legendary. That said, we aren’t getting much new under the stone during the half hour this attack lasts. That is not all bad as WINDS OF GENOCIDE know their way around the genre and songwriting touches, so it never gets uninspiring nor boring, and they do also mix up faster paced songs with a couple of slower pieces, that mixes things up quite good. The Brits are best in my opinon, the more Hardcore the churns into the mix, the straight up aggressiveness together with the distorted raw guitar riffs and the screamed growl / yell and the following intensity. This is a quite enjoyable album, not one for all, though fans of Crust and Death Metal in an updated form, compared to the good old days, even though the fangs back to nostalgia lane are quite clear. www.facebook.com/pages/winds-of-genocide/187999007899518, www.pulverised.net

WINDS OF GENOCIDE - The Arrival Of Apokalyptic Armageddon - by Lem Lycurgus