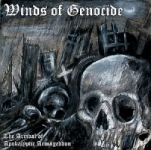 WINDS OF GENOCIDE
The Arrival Of Apokalyptic Armageddon
(self-financed)
12:53min

WINDS OF GENOCIDE’s song titles lead you to imagine they would be a savage War Metal band… ‘Hellhounds Of The Macabre End’, ‘Storms Of Hooded Horsemen’, etc. Somewhat disappointingly, this was not the case as a Hardcore d-beat influence drives the whole affair. Ultimately, what we have here is a decent melodic Death Crust band from the UK. Heavy, hoarse vocals predominate but some EXTREME NOISE TERROR screams come during the occasional single-foot fast Hardcore blasts. The perfect reference points for this are Germany’s AUDIO KOLLAPS but less Metal riff oriented, instead leaning toward the melodic Hardcore songwriting of early WOLFPACK from Sweden before they changed their name to WOLFBRIGADE. And there you have it! www.myspace.com/windsofgenocide