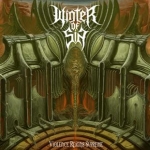 This Dutch band has inked a new deal with Cyclone Empire and recorded their 3rd album with a new revamped line-up, which now includes Henri Sattler (ex – GOD DETHRONED) on vocals and Michiel van del Plicht (ex – GOD DETHRONED, PROSTITUTE DISFIGUREMENT) on drums. Their previous album "Razernij" came out in 2008 and from what I gather was a fairly straight, melodic Black Metal affair – a genre I try to stay away from, so I’ve never heard it. But it has been said that the new guys shifted the band into a more aggressive Death Metal territory on "Violent Reigns Supreme". Obviously this line-up change is a big selling point for WINTER OF SIN and you’ll see it mentioned in almost every review… this one included. Why? Well, my uneducated guess is that they want to bring GOD DETHRONED disciples to follow them and I think it’s a fair shot. Because otherwise they don’t have much else to rely on, definitely not on the originality, hehe. The music is rather standard, fast melodic Black / Death Metal, executed with fiery conviction and a high musicianship level and I admit – it grabs you by the throat and doesn’t let go. My problem though is that it gets repetitive after a while and my attention starts to wander. The production is definitely modern, clean and punchy and that carries this album on more than one occasion. WINTER OF SIN don’t bring anything new to this style, but for people who live for speed, catchy melodies, speed and more melodic speed, this one could prove a gem – these guys obviously know how to play fast. There are few tracks that stand out more than the others, for example ‘Maelstorm’ and ‘Black Ashes’ really can whip up a storm and make you loose your limbs with catchy riffs and unrelenting drumming attacks. I guess it can be summed up pretty simple – if you are an old school Death Metal maniac like me, you won’t regard this album too highly, but if you like all that melodic Black / Death stuff that’s been coming from Sweden since mid 90s, like NAGLFAR, old DARK TRANQUILLITY and DISSECTION, then you have to give it a shot. www.winterofsin.com, www.facebook.com/pages/winter-of-sin/163619410366144, www.cyclone-empire.com