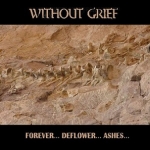 WITHOUT GRIEF from Falun, Sweden was another outfit, who got caught by the second wave of Swedish Death Metal, the so called Gothenburg style, which had its peak back in 1996 / 1997. WITHOUT GRIEF was one of those talented newcomers, who perished in the storm of good releases, as their former label Serious Entertainment did not have the power, to support them that much and also bands like IN FLAMES, DARK TRANQUILLITY and DISSECTION were in the focus of the scene. Formed in 1995, they seem to have rehearsed as hell, as their first demo was released just one year later in 1996, containing three tracks plus intro and consisting of some fine melodic Metal tunes, very close to old IN FLAMES during their "Subterranean" and "The Jester Race" period. There is nothing to complain about these three tracks, as they sound fresh and easiliy could have fitted onto the mentioned classic IN FLAMES albums. This demo brought them the attention of Serious Entertainment, who signed them and the band immediately started working on the first full-length, which finally was released in 1997 in form of "Deflower". This album included all trademarks, which made this genre so popular. Twin guitars with fine leads and melodies, influenced by classic Heavy Metal, precise and fast drumming, various changes in speed and vocals changing between screams and grunts. If War Music / Regain would have picked up those hopefuls, maybe their history would have been different. Also their influence of classic Swedish Folklore is very interesting and was included in nearly all tracks, similar to the early IN FLAMES outputs. The quality of the eight presented tracks was above average and for fans of this genre a must have. In 1999, the band released their second album "Absorbing The Ashes" again via Serious Entertainment. The new eight tracks showed a small development into a more brutal direction, as more Thrash Metal rhythm guitars found the way into their sound, while the leads still remained melodic. The drumming became more complex, including more breaks to support the new Thrash Metal direction. Also the bass lines can be heard a lot better on the second album, in support of this development. The slow Folklore parts have gone in favour to a more brutal approach, but still a very good album and fans of THE CROWN should give this a listen. Russian label GS Productions saw the quality of the material and has re-released the two albums including the demo as a 2 CD set, limited to 200 copies only. So if you want a physical copy, be quick and order it from: www.gsp-music.com. Info about the band can also be found at: www.metal-archives.com/bands/without_grief.