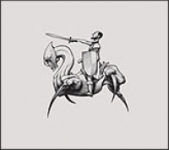 WOBURN HOUSE
Message To Ourselves Outside The Dreaming Machine
(Paradigms Recording)
54:30min

Ah, another gem defying a sound definition, haha. WOBURN HOUSE, the newest band / project with musicians from ISLAND, KLABUATAMANN, VALBOR and ORBO has been taken under the wings of Paradigms Recordings, known for releasing avantgardish and unique acts such as AMBER ASYLUM, WRAITHS or JARBOE (!) in nicely packaged limited editions. “Message…” is a heavy, yet very melancholic album that encompasses four very lengthy and packed tracks (ten to fifteen minutes each). Other than the complex and feral aggression predominant in VALBORG, WOBURN HOUSE is more introspective, drawing from Doom Metal and Sludge (not that much but anyway) as well as Post Rock (which is a pretentious label more often than not but I guess you know what I want to bring across). Dynamics are important here as the heavy chugging parts dissolve into very calm, dreamlike accoustic and back again. The production, provided by Armin Rave, is clear, natural but also quite heavy. Every instrument is clearly audible which is not a natural thing, especially for the bass which is luckily very present on “Message…” There are long sections throughout the album without any vocals where the intruments are “flowing”, left to develop scarce tones into more complex, partly progressive melodies and moods. The vocals are mainly clean with some seldom screams here and there. “Message…” isn’t an easy record and will most likely appeal to those who are fond of rather unusual kinds of heavy music and who are close to Doom as well as Post Rock and experimental heavy music in general – if you consider yourself as somebody who is open minded when it comes to good music I recommend you to go to www.woburnhouse.net where you can check out three of the four songs from this album. “Message…” is available for 10 Euro (Germany) / 15 Euro (world) which is really fair for a cool looking digipak. You can also turn to www.paradigms-recordings.com and have a look at the rest of the label’s roster.